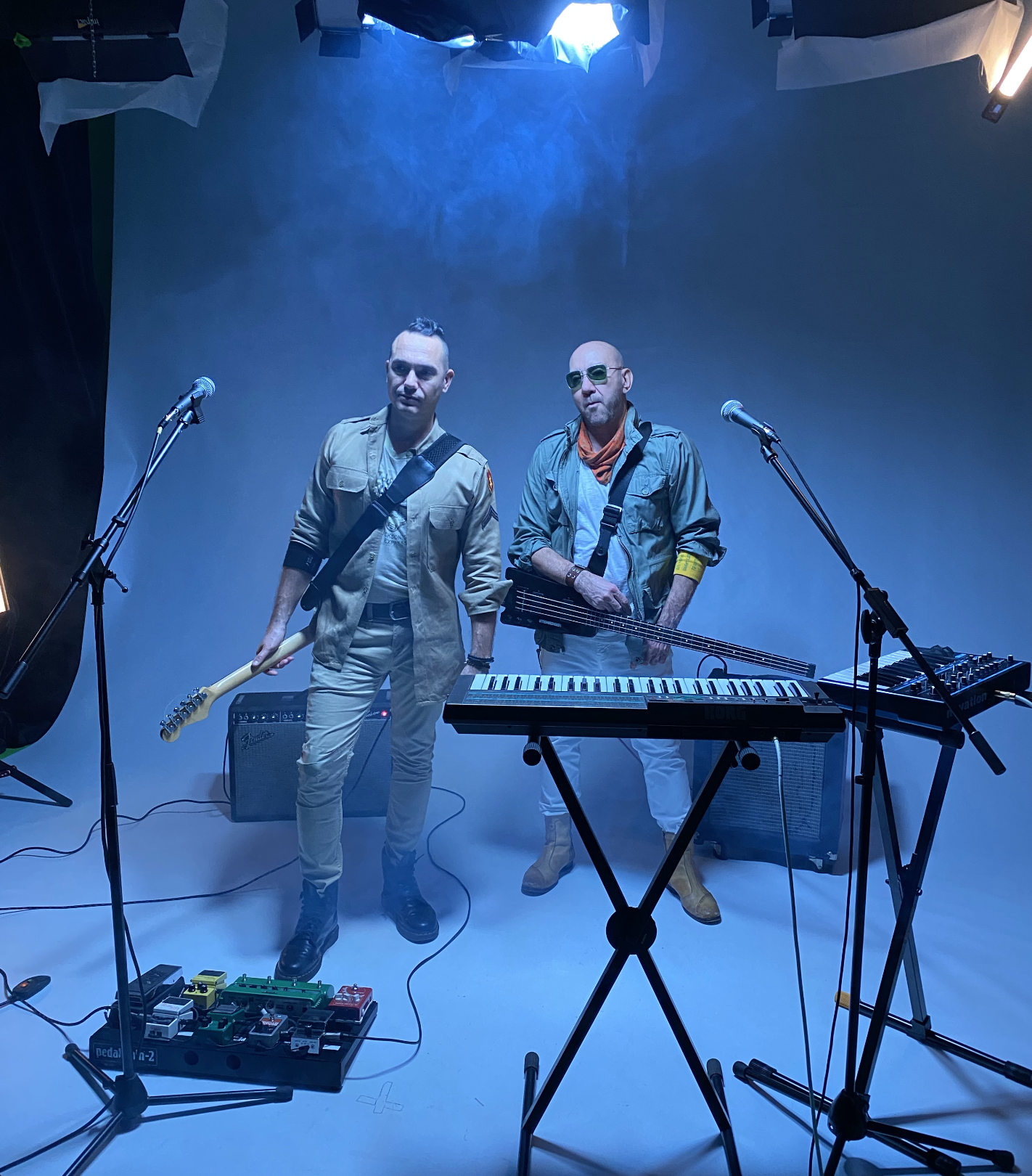 A two piece rock/funk band that (prior to C-19) you could find at various venues around the city including The Railway, Lamplighter, Roxy, Princeton, Lana Lou's and The Biltmore. SX70 is James Filbry (guitar, vocals) and Jim Keller (bass, vocals, drums, sampler). A genre-bending outfit rooted in their love for purple and paisley. Never typical, always captivating, SX70 is ripping a new hole in independent pop and is about to release a bunch of new tracks and videos. Stay tuned!

Who are the members of SX70 and how did you meet?
JF: It’s mainly just Jim and I. We met years ago through a mutual friend on the rooftop of the Waterfall Building.
JK: We have some veterans too. Mostly for our live shows.

Your band sounds like a robot from Star Wars. What does the name mean?
JK: (Laughs) It’s from the polaroid camera. Instant gratification, I guess. Plus it looks cool & sounds like sex when you say it.
JF: Sex70

You are both respectable Art Directors… what on earth possessed you to go into music?
JF: We’ve always been into it, we just decided to get into it together.  Our first song was one called ‘kitty trance’ which was just for fun but then it turned into much more from that point on.
JK: I love making music more than making ads.

What instruments do you play? Electronic or otherwise…
JK: I play bass & synths, plus write material & arrange drum tracks & such.
JF: Lead vocals, guitar and write and arrange with Jim.

What instruments do you wish you could play?
JK: Horns and lead guitar.
JF: I feel like I already play a few….just not as well as I’d like.

What are your songs about?
JK: Spiders, Being invisible, Angels & devils. The usual stuff.
JF: F*#king and Fighting.

If your band was a car, what would it be (please specify model and year)
JK: '66 Toronado
JF: Little Red Corvette

Little Red Corvette or 1999?
JK: That’s like choosing between your girl & your mom.
JF: I think you know the answer.

How much did a bright red cod piece influence your bass lines?
JK: Lots, if you are referring to Cameo. Love 80s funk. Not sure I can pull that cod piece off. Maybe James could.
JF: Think I’ll pass

New York or San Francisco?
JK: New York. Was born there, my roots. SF rocks too. Great city
JF: Love NY.  Never been to San Fran but sure I’d love it there too.

Pick a screaming fan out of the front row of one of your live shows… Describe her (or him) in detail (occupation, relationship status, pet preference, etc.).
JK: Hot girl, sweaty & dancing. Don't care what she does for a living, her pet's name, or her boyfriend’s for that matter.
JF: Screaming fan?

Which music festival do you dream of playing in?
JK: SXSW, Coachella, Pitchfork.
JF: T in the Park, Glastonbury, Sasquatch.

If you could hire anyone to direct your next music video, who would it be, for what song, and what would it look like?
JK: Kyle Cassie for "Spider". I love Mark Romanek, maybe the next one.
JF: I’d have Wes Anderson and Darren Aronofsky direct the 2 individual parts for Stereo Heart.

What do you wear onstage?
JK: Not Cod pieces (laughs) I try & let the music be forefront.
JF: My uniform.  T-shirt and Jeans.

If you could collaborate with any artist, who would it be, and what would that look like?
JF: Bowie looking like a Warhol.
JK: Prince. Maybe playing ping-pong on a break. Letting him beat me.